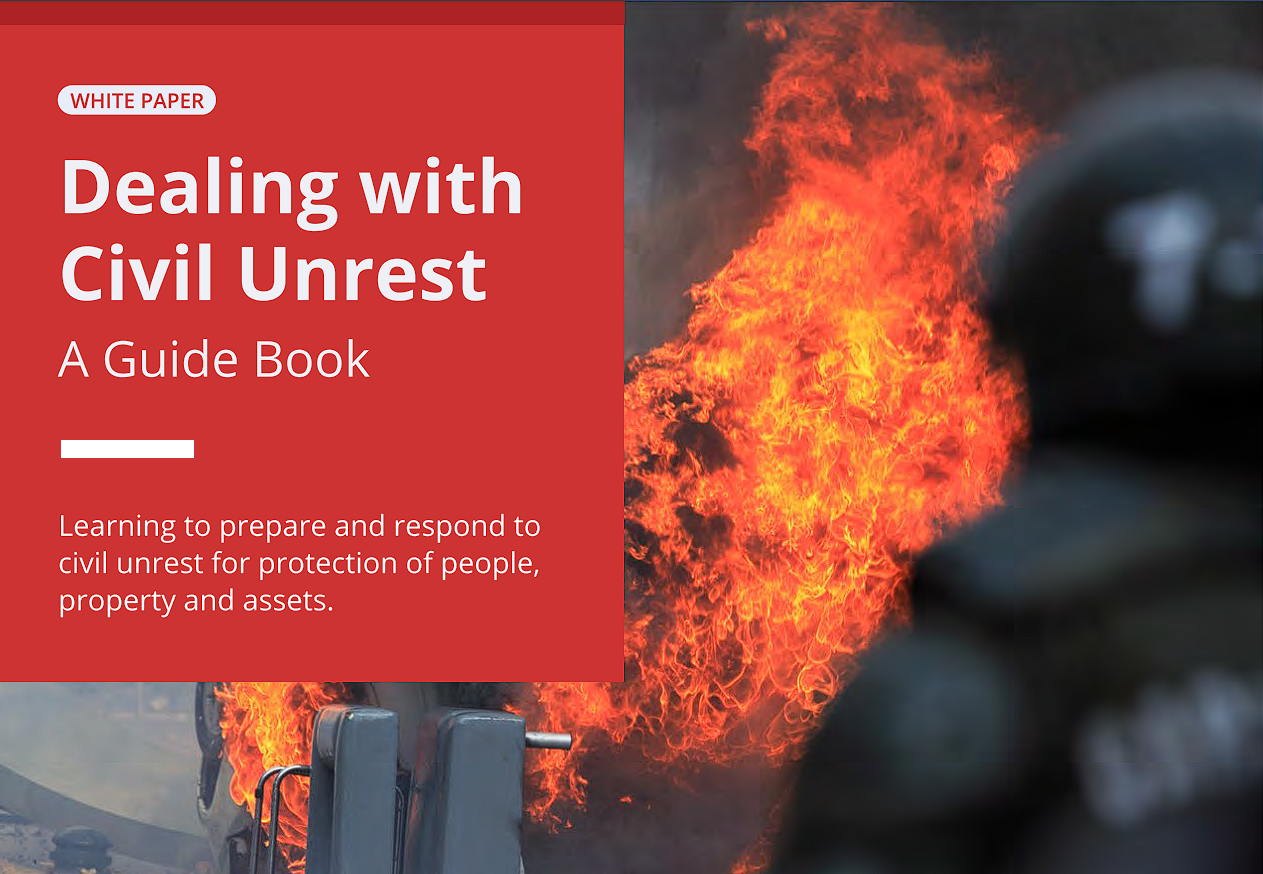 Learning to prepare and respond to civil unrest for the protection of people, property, and assets.

Civil unrest is not a new phenomenon. Throughout history, populations have seen violent and destructive acts — en masse — in response to social grievances, political dissatisfaction, cost of living crises and other socioeconomic hardships. Since 2016, the United States has experienced increases in civil unrest throughout its cities and the numbers indicate these incidents are on the rise.

The recent surges in civil unrest can be attributed to a multitude of factors, but the results are almost always the same; endangerment of human life, destruction of property, disruption in an orderly supply chain and skyrocketing insurance and rebuilding costs.

These very real threats to organizations must be met with an augmented approach to preparedness and business continuity. Organizations at risk must take the safety of their workforce and colleagues as the most fundamental obligation. However, the protection of assets and property demands a greater understanding of the risks associated with civil unrest, addressing the organization’s preparedness and response plans and having the tools in place to facilitate best outcomes.

This guide explores some of the history and risks of civil unrest and provides the processes and tools you need to protect your organization in the event of a civil unrest occurrence.

History and Indicators of Civil Unrest in the United States

Throughout its history, the United States has been no stranger to civil unrest. These events have, largely, taken the form of protest or rioting as a response to some manner of grievance shared by large numbers of individuals.

In July of 1863, New York City was under siege during what would be called the Draft Riot of 1863. Mobs of dispossessed workers took to the streets in protest of oppressive wages and the social inequities of conscription practices during the civil war. Residents and police were assaulted and draft headquarters and other buildings were burned, causing property damage of over $1,500,000.

The Los Angeles riots of 1992 (in response to the LAPD beating of Rodney King) resulted in 50 fatalities, 2,300 individuals injured and over $1 billion in city-wide property damage.

In addition to social grievances, many incidents of civil unrest in the United States have been born out of economic upset, specifically the cost of living.

According to the Verisk Civil Unrest Index Projections, over 70 countries will likely see an increase in civil unrest in 20221 with sharp increases predicted for the United States. As a result of a global COVID-19 pandemic, lockdowns, small business closures and the loss of jobs, Americans were left in precarious financial situations by the end of 2020. Further exacerbating their difficulties, increased prices on essential items (gasoline, food and energy) and a deterioration in mechanisms for channeling grievances have — predictably — left many Americans feeling helpless and frustrated.

In addition to the economic burdens faced by middle-class and lower-earning Americans, political tensions swelled to historic proportions from 2020 through 2022.

In July of 2022, the Supreme Court of the United States issued a number of high-profile decisions that were met with varying degrees of public opinion. Social media backlash against the Court and other political figures gained in strength as did protests and other demonstrations by American citizens and residents.

According to the National League of Cities (NLC), harassment, threats and violence against elected officials also rose sharply in 2021 with 87% of those officials surveyed observing increases in such attacks2.

On their own, these separate circumstances of social, economic and political discontent can be serious indicators of looming civil unrest. When combined, however, they can produce unpredictable social responses that bring with them destruction of property, widespread injuries and even fatalities.

As we’ve seen from history, factors such as economic downturns, political disapproval, social unrest and higher costs of living can all create breeding grounds for civil unrest. For organizations to take the necessary precautions, their stakeholders must first seek to understand the history and costs associated with civil unrest and violence in our nation’s communities.

The Threats of Civil Unrest to Life

According to a New York Times report, at least 6 people lost their lives to violence during the protests that started after Gorge Floyd’s death in 20213. At least 140 cities across the United States saw protests, riots and civil unrest resulting in increased law enforcement presence and the activation of the National Guard in over 20 cities.

Injuries incurred during protests and other uprisings can range from minor to life-threatening, with the most common injuries including: 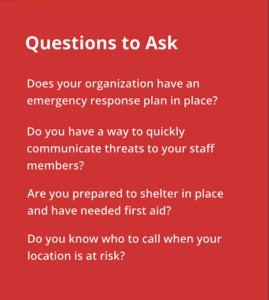 Additionally, psychological trauma is a real consequence (to protestors and bystanders) when public protests turn violent. These injuries can flood local emergency centers and cause long-lasting effects to the victim or patient. While most medical centers and hospitals have plans in place for responding to civil unrest, many organizations do not.

Even for the uninvolved bystander, the threat of a protest escalating to a violent situation is real and brings with it potential jeopardy in the form of physical injury. For organizations in areas of risk, employee and staff safety must be addressed ahead of social disruptions. This means acquiring a means of threat monitoring, conducting drills, keeping lines of communication open with staff members and having a response plan in place.

The Costs of Civil Unrest in Dollars

Whether intentional or unintentional, some protests escalate into riots. When riots occur, it is inevitable that property and other assets will be damaged or destroyed. This leads to additional costs to the victim organization by way of replacement assets and increased insurance premiums.

Hardening an organization’s facilities can be an effective means of protection, but only if there is enough time and prior planning to deal with an imminent threat.

In the United States alone, the cost of civil unrest can easily reach the multimillion dollar mark and, at times, over a billion dollars in losses have been recorded5. These costs are absorbed by the victim organization but also taxpayers. 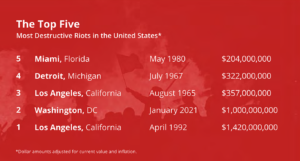 Most organizations have learned the hard way that typical insurance policies do not cover business interruption relating to civil unrest. For business owners, even minor disruptions can lead to staggering losses.

ince civil unrest can lead to supply chain disruptions, reduced consumer confidence and other financial downturns, its impact on an organization can be difficult to gauge or predict.

How to Boost Your Preparedness

Understanding the difference between peaceful demonstrations and violent disturbances is important. However, it is also vital to understand that apparently peaceful gatherings can oftentimes turn violent and disruptive. For that reason, your organization can never be too prepared for destructive events when protests are taking place.

Best practices in preparedness and response can vary based on a number of factors. Consider the potential size of events, proximity to your location, your area’s history of public demonstrations and the safety of your staff members.

Civil unrest is just one example of the need for organizations to have in place a comprehensive preparedness and response plan that serves to mitigate risks and enhance the safety of individuals, property and assets.