Board Certified in Security Management & Investigations 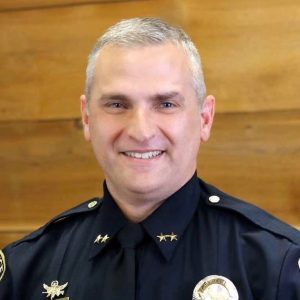 With three decades of combined public safety experience as an army infantry officer, firefighter, EMT, police officer and security professional, Matthew Antkowiak is well poised to help protect industries and organizations through communications and consulting. He joins the Regroup team as a security expert for K-12 schools and houses of worship.

Matthew holds a Top Secret security clearance. Matthew was the Assistant Chief of Police for the Oak Ridge Police Department in Texas. Matthew was a Task Force Officer/Investigator assigned to the U.S. Department of Homeland Security on the North Texas Human Trafficking Task Force. Matthew is a certified Master Peace Officer by the Texas Commission on Law Enforcement. Matthew is board certified in Security Management (CPP) and Investigations (PCI) by ASIS. Matthew is now the Director of Safety and Security for Fielder Church in Arlington, Texas.

Matthew served United States Army both on active duty and in the national guard, starting as an enlisted soldier and being commissioned and Infantry Officer. He served as a military police officer for the U.S. Army and twice deployed with the 101st Airborne Division. Following active duty, Matthew served as a Oklahoma City firefighter and EMT. He then joined the Moore Police Department, where he established an in-service training program, earned the status of ASP International Instructor Trainer, Master Defensive Tactics Instructor Trainer, and served as a Field Training Officer, and Police Academy Instructor.

Following the terror attacks on Sept. 11, 2001, Matthew returned to the military, serving with the Army National Guard with the 36th Infantry Division.

Matthew was selected to the U.S. Army Officer Candidate School, and graduated as the distinguished honor graduate. He commissioned as an Infantry Officer, and was awarded the U.S. Army Leadership Excellence Award.

He next joined the City of Dallas Department. While serving as a detective there, Matthew cross designated as a Special Deputy U.S. Marshal and was assigned to the U.S. Secret Service Task Force. During service with the Dallas Police Department, Matthew served as a patrolman, detective, defensive tactics instructor, driving instructor, mobile field force instructor, CRT/Deployment member, and served on the Critical Incident Response Committee. In that role, Matthew assisted in the planning and protection of an NBA All Star Game, MLB World Series, and NFL Super Bowl as well as numerous other large special events.

In addition to his decades of service and experience, and countless certifications and honors, Matthew has provided expert testimony in both state and federal courts related to police procedures and the use of force. All of his experience makes him uniquely qualified to help Regroup’s clients with all of their safety needs.

Contact us to learn more about Regroup’s Security & Risk Mitigation Services and get a customized quote from Matthew Antkowiak and his team.