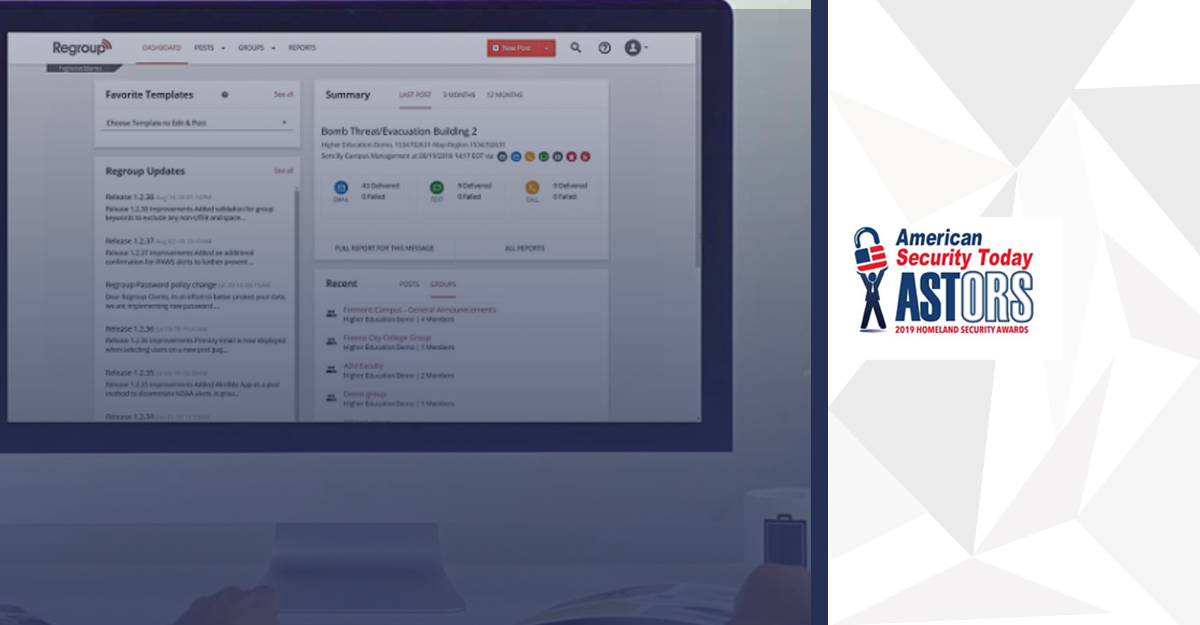 Regroup Mass Notification announced that it has received a nomination for the 2019 American Security Today ‘ASTORS’ Homeland Security Awards.

“We are honored to be nominated once again by American Security Today. As an organization dedicated to keeping workforces, students, and the public-at-large safe and informed, this nomination is a much-appreciated acknowledgment of our team’s hard work, and our faithfulness to our customers’ continued success,” said Chris Utah, the Chief Operating Officer of Regroup.

Regroup is based in San Francisco. Its cloud-based system enables two-tap messaging to mobile devices, landlines, social media, email, websites, PA systems, digital signage and more. Adding to its effectiveness in an emergency, Regroup’s clients can send up to 12,000 voice messages, 60,000 text messages, and 40,000 email messages per minute.

The 2019 nomination highlighted several of the company’s achievements over the last year. A few highlights:

Wildfire Response: The fall of 2018 saw the deadliest and most destructive wildfire in California history. The Camp Fire (named after Camp Creek Road, the location of its origin) killed at least 85 people, and covered almost 240 square miles. Regroup was able to serve several of its customers by enabling them to issue warnings and information about the devastating disaster. These included a local college, which used the system to shut down the campus, and a medical center, which used Regroup’s platform to call in additional staff support when a nearby facility had to evacuate and move patients to its location.

Preventing a School Shooting: When campus police at Pensacola State College heard that a potentially dangerous and armed individual was headed to its campus, every second counted. The chief of police there was able to use his mobile phone, from his vehicle, with just two-taps to issue an emergency lockdown of the school in order to keep everyone safe. The suspect was arrested and no one was harmed.

Opt-In For Safer Swimming: Dare County, N.C., has the highest number of riptide-related deaths in the country. The county used Regroup’s “text to join” feature for both tourists and locals to become part of a life-saving notification system about beach and water conditions.

To read a full feature story including video about the nomination, check out the American Security Today website. In 2018, Regroup was named the Platinum Award Winner by AST, for its outstanding efforts in emergency communication and innovative solutions in mass notification.

“To be considered by AST in 2019 — after winning the award in 2018 — validates our mission to constantly innovate, improve our customer service, and serve our clients with the best-in-class solutions,” Utah said.

The ASTORS Awards are given to service providers in the public or private sector that have done the most to improve national safety and resiliency. According to AST, the Annual ‘ASTORS’ Awards is the preeminent U.S. Homeland Security Awards Program. The program seeks to highlight the most cutting-edge and forward-thinking security solutions coming onto the market today, to ensure businesses and organizations have the tools they need to keep our Nation safe.